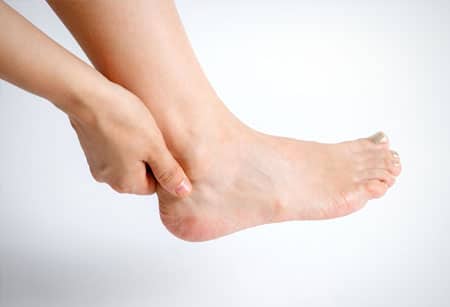 Ankle sprains, believed to be the most common sports-related injury, occur approximately 23,000 times a day in the United States during both sports and everyday life activities. Most commonly the ankle is turned in or twisted under the leg suddenly by a collision or by an unexpected change in the ground level. The greatest risk factor for getting a sprain is having had one in the past.

HOW IS a sprained ankle DIAGNOSED? 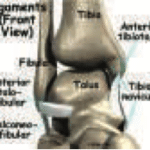 Another area that can be affected is the syndesmosis, or the ligaments connecting the fibula and tibia. These are referred to as “high” ankle sprains (see figure 2).

Finally, the deltoid ligament on the inner ankle can be sprained as well but it is very stout and less commonly affected.

HOW IS a sprained ankle TREATED?

The goal of treatment is early diagnosis, functional management, and rehabilitation. These are all key steps in the management of ankle sprains that can help prevent chronic ligament instability of the ankle. Chronic instability can occur after injury because the ankle can be stiffer, weaker and more prone to re-injury if not properly rehabilitated.

Initially the RICE principles can be employed: Rest, Ice, Compression and Elevation. Patients may also need crutches if unable to bear weight.

Next, bracing can be used with either an Air-stirrup pneumatic splint or lace-up style ankle brace. These allow protected ambulation without complete immobilization and play an important role at the start of your patients’ rehabilitation.

Finally, as the pain and swelling resolve, weakness and instability need to be addressed with appropriate directed physical therapy in order to minimize the chance of recurrence and resulting chronic instability.

WHAT TO DO NEXT?

Most ankle sprains are likely to resolve without the need for surgery, however, some patients after appropriate treatment of an ankle sprain still have ongoing pain and difficulty returning to pre-injury levels of activity.

For the ankle sprain that does not seem to resolve, it is important to rule out less common occult injuries that can occur along with the sprain, such as cartilage injuries or tendon tears. MRI is helpful in this circumstance and can identify injuries that, when treated, can restore your patient’s function.

Finally, some patients have anatomy that pre-disposes them to having ankle instability after sprains and the ligaments may need to be surgically stabilized if conservative management fails.